Home > Life-Long Lessons Learned Through a Summer of Internship 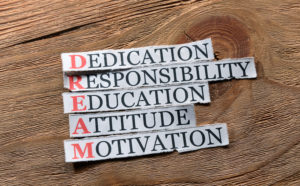 With graduations in full swing and vacation starting for kids in school, my thoughts wander back to summer breaks when I was in school, growing up in Washington DC. My family encouraged my sisters and me to have scheduled summer activities, lest we lounge around for three months. So whether it was selling lemonade, organizing a fan club for our family cat then designing and selling fan club t-shirts (family and close friends were the only members), or mowing lawns, my sisters and I had enterprises each summer vacation.

In high school, I ventured beyond the confines of the neighborhood to find something more exciting to do. After applying to an urban youth employment program, I was disappointed at being placed in a position at a photocopy center in a dicey part of town. When the job counselor checked in, I expressed wanting to find something more challenging. She said if I could find a job I liked, she would make sure I was paid.

Throughout the school year, I would walk after class to attend shows at the Kennedy Center and films at the American Film Institute, which was situated in the same building. With my schedule of sometimes 18 films and shows a week, the price of tickets quickly mounted, so having a job there would mean not having to pay for admission. Both organizations rarely had positions available, and were not particularly interested in paying an unskilled high school student like me looking for summer work.

I looked up the name of the person in charge, borrowed a blazer from my mother’s closet, and made a trip to the reception desk at AFI, where I asked to see the manager. When asked what it was in reference to, I quickly replied, “the internship program”. The manager came out a few minutes later, scratching his head, and said they did not have a program like this. When I asked “what if you did?”, he invited me into the screening room to talk. I explained that I could help his staff with whatever office tasks were needed and it wouldn’t cost them a cent. I gave him my job counselor’s name and phone number, and the next day I was working at the AFI.

Each day was filled with new assignments in different departments. Although I was painfully shy, I mustered up the courage to walk down the corridor and ask who needed assistance. Different departments would request me, and expressed such appreciation that I was motivated to do a better job. On one day, I would spend hours in a windowless conference room proof-reading galleys with an associate editor for American Film magazine. On another, I was asked to catalog a vast library of images.

Their public relations department always had deadlines, and the easy-going department head, Gary explained new things in a simple way and had a great sense of humor. His assistant taught me how to organize sometimes complicated projects, and no matter how stressful, she always maintained her composure. Much of the work entailed press packets, putting together and distributing news clippings and typing press releases. Gary taught me how he structured a press release, something I still use in my work today.

While I felt sometimes like an outsider because of the age difference, I observed the adults around me, their camaraderie and dedication to a common goal. Everyone there loved movies and wanted to preserve them. There were occasional flaps between departments and the hierarchy, but after work everyone got on the same elevator together, all smiles. In the evenings I went to the theater to see the programs that I had participated in promoting; To see the final, successful outcome made me proud of my new colleagues and, also of my own efforts.

As I became acclimated at the American Film Institute, I wandered through the tunnels in The Kennedy Center in search of other things to do. I had noticed when reading the program for the American Ballet Theater that the wardrobe mistress was Japanese, so I introduced myself to her, saying I was half-Japanese and loved ballet, and asked her if I might volunteer to iron or steam costumes, and later, I became an usher at the two halls.

Once the summer was over, I was offered entry level salaries at both the AFI and the Kennedy Center for after school and weekend work. My attention favored my activities there, and as a result school studies took a back seat. In retrospect, I was fortunate to be in a school that offered euclidian geometry, acoustics learned through laying out your own fret-board and building a dulcimer from plywood, competition sentence diagramming and translating the Gallic Wars from Latin on sight. It was, however, not easy to do homework at the canteen next to the dressing rooms, with Baryshnikov, Aretha Franklin or Jack Nicholson, among others, strolling in for a vending machine sandwich. My headmaster in school, who I admired, and with whom I had stayed in touch in recent years, encouraged my after-school interests. His passing just a few weeks ago at the age of 94 felt like the loss of a close relative.

There was a 40th anniversary reunion of AFI employees recently, and for a few hours, it was as though I had been transported back to the 1970’s. Through the years, I have recollected my colleagues through the eyes of a teenager, and realize now that these were accurate impressions. I am grateful for the life-long friendships with positive people who were passionate about their work and generous of heart to a high school intern.

An intern whose college studies center on real estate and business, is working in my Shelter Island office this summer. I hope I can share in a constructive way some of the valuable tools I was taught when I entered the workforce.

Wildlife around us is a part of our island and a gift. Turtles of all kinds venture across our roads, often to lay eggs. This past week on New York Avenue, I stopped to help a painted turtle crossing the road from the Ice Pond, only to have a truck pass my car over double yellow lines and run over the rear of the turtle, crushing its back but not killing it. Turtle Rescue of the Hamptons alerted North Fork Animal Hospital, which was was thankfully open. They euthanized the little creature, who had its head extended and was trying to walk, seeming to not realize it had been injured. Please drive carefully and give our wildlife a brake.

"Thanks so much for all you help! It was a pleasure working with you, why can’t all real estate brokers have your attitude?"
- Recommendation from A.H. New York, NY
View All